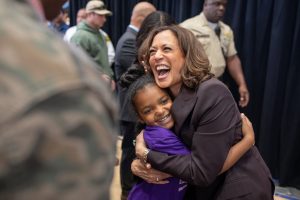 At just over 100 years since white women gained the right to vote, we recently watched the swearing in of our first female vice president. During a time of pandemic when the COVID vaccine had little momentum, Justice Sonia Sotomayor administered the oath of office to Kamala Harris. Long ago, her mother had told her, "Kamala, you may be the first to do many things, but make sure you are not the last." Fortunately, other women had already followed that advice. Because of courageous women who blazed a trail before her, Ms. Harris stands poised to continue that thread. We know many of our senior friends will enjoy remembering those who came before.

Female Candidates for President and Vice President from Major Parties

While she may be the first female actually elected as vice president, she was not the first contender. Take a look at the most well known names to vie for president or vice president.

Democrat Hillary Clinton had a front row seat to experience a presidency when she served as First Lady. The term of her husband, Bill Clinton, spanned from 1993 to 2001. Since that time, she ran a successful campaign to represent New York in the senate as the first former first lady to win a public office seat. Shortly thereafter, Barack Obama appointed her as Secretary of State.

While other females have won nominations from lesser known parties, Hillary Clinton is the first woman nominated for president by one of the two major political parties. Her loss to Donald Trump, Jr. in 2016 did not dampen her involvement. She regularly speaks out about important issues, particularly through her Twitter account.

On the Republican side, Sarah Palin also sought the second highest office in the land. During his 2008 presidential campaign, John McCain selected her as his running mate, making her only the second female vice presidential candidate for a major party. At the time of her nomination, she served as governor of Alaska. She had also held offices on city council and as mayor of Wasilla. On July 3, 2009, Palin announced that she would not run for reelection as Alaska's governor. Since then, she has showcased her home state on television and remained vocal about issues and candidates she supports.

Geraldine Ferraro became the first female candidate for vice president from a major party when Walter Mondale selected her as his running mate in 1984. At the time of her nomination, she represented New York in the House of Representatives. Her diverse background also included working as a teacher, businesswoman, and author. Ultimately defeated by the Reagan/Bush ticket, she went on to become ambassador to the United Nations Commission on Human Rights. Ms. Ferraro also worked on Hilary Clinton's 2008 presidential campaign before her passing of multiple myoma in 2011.

Female Candidates for Vice President from Other Parties

While we've covered the female candidates for president and vice president from the two major parties, the story did not start with them. With limited space in this post, we can't cover all former candidates, but there's an amazing article from National Geographic that details 11 women who paved the way for Kamala Harris to become our first female vice president. Which one inspires you?